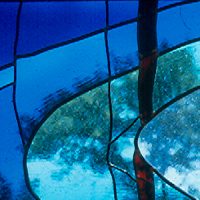 A few weeks ago Jay and I saw “The Shape of Water,” a movie by Guillermo del Toro which received this year’s Academy Awards for Best Director and Best Picture. This motion picture is truly shaped by water and abounds in imagery that evokes sensuality, danger, healing, and life.

Perhaps it’s because of the movie’s lingering effects that poems about water are capturing my imagination during this National Poetry Month. Or perhaps it’s just because late snows alternating with warm days have repeatedly flooded area ditches and filled our neighborhood with the sound of rippling, burbling, and whooshing.

Recently I noticed a display of poetry books at our public library and plucked Delights and Shadows from the rack. Written by Ted Kooser, who was Poet Laureate of the United States (2004-2006), Delights and Shadows won the 2005 Pulitzer Price for poetry. If you watch the video on Ted Kooser’s website, note that what might be taken for a shop name in the window of his studio says “Poetry Made and Repaired.” In Delights and Shadows (Port Townsend, Washington: Copper Canyon Press, 2004), I was delighted by the metaphors Kooser uses to make poetry. No repairs are needed for this poem that turns an ordinary activity into enchantment.

A Washing of Hands by Ted Kooser

She turned on the tap and a silver braid
unraveled over her fingers.
She cupped them, weighing that tassel,
first in one hand and then the other,
then pinched through the threads as if searching for something, perhaps
an entangled cocklebur of water,
or the seed of a lake. A time or two
she took the tassel in both hands,
squeezed it into a knot, wrung out
the cold and the light, and then, at the end,
pulled down hard on it twice,
as if the water were a rope and she was
ringing a bell to call me, two bright rings,
though I was there.

If you like “A Washing of Hands” well enough to carry and share it on Poem in Your Pocket Day, April 26, you will still need something appropriate for April 23, the 454th birthday of William Shakespeare and this year’s “Talk Like Shakespeare Day.” Consider the following watery rhyme from The Tempest.

A Sea Dirge by William Shakespeare
Full fathom five thy father lies;
Of his bones are coral made;
Those are pearls that were his eyes:
Nothing of him that doth fade
But doth suffer a sea-change
Into something rich and strange.
Sea-nymphs hourly ring his knell:
Ding-dong.
Hark! now I hear them, –Ding-dong, bell.

If that doesn’t ring your bell, you might want to find something different to celebrate the bard’s birthday. Did you know there are YouTube videos on how to talk like Shakespeare?!

Long before seeing “The Shape of Water” or reading Ted Kooser’s poetry, water was inspiring some of our stained glass designs. The top window is a detail from a 60-inch-wide window over the entry double doors of a church. The window reminds church-goers that submersion in the baptismal pool symbolizes both death (to sin) and birth (to new life). The other window, titled “Flowing Waters,” provides beauty and privacy for a bathroom.

Reflect on the imagery of the stained glass (click on the small image to enlarge it) and the poetry and then share: What is your favorite poem about water?