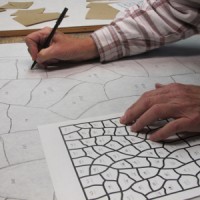 It has been almost a year since I’ve written in this space. It’s been more than a year since Jay and I have exhibited glass or even created any glass work. So, what was going on?

Beginning in the spring of 2016, Jay experienced pain that was diagnosed as sciatic neuritis. Over the course of a year, the pain sometimes abated temporarily but gradually worsened and became constant, to the point he could not enjoy studio work and definitely could not do the heavy lifting required for us to set up and take down a weekend arts exhibit. In June, 2017, Jay began a course of physical therapy and was just beginning to walk better and have less sciatic nerve pain when both of his hips suddenly began to complain out loud. Yes, really! His hip joints made grating noises that sounded like floorboards creaking! The medical term is “crepitus” or “crepitation,” but Jay called it his “rhythm section.” X-rays revealed the percussion sounds were caused by bone rubbing against bone, which is a painful way to make music. By the time his first hip replacement surgery date arrived a month later, Jay could hardly walk into the hospital. He received a second new hip nine weeks after the first. In the four months since then, physical therapy, home exercises, lots of rest, good nutrition, and a few weeks in a warm climate have worked wonders.

Jay has been building up time in the glass studio for a few weeks now. Last summer he had just created the “cartoon” (the full-size drawing) for a pair of stained glass windows I designed, when his orthopedic problems made it impossible to continue. (I didn’t try to pick up where he left off as I’d stopped cutting glass, for the most part, years ago. Besides, I was busy taking care of the house, gardens, and a disabled husband.) Now that Jay is back in the studio, he has labeled the cartoon with pattern numbers and glass colors, and cut out the paper pattern pieces for both glass panels. If Jay’s studio rhythm continues, we hope there will be much more progress to report in another month.

One way Jay was able to stay creative during the first months of healing was through baking. Making dough and shaping loaves was therapeutic and we marked recovery progress by how much he could do without my assistance. At first I hefted the mixer up onto the counter, brought bags of flour to the kitchen when the canister was empty, and helped transfer the raised loaves into the oven. Within two weeks, Jay could do all but lift the mixer, and it wasn’t long before he managed that, too. Before Christmas he was strong enough to spend a marathon week baking gift loaves for our neighbors and service people.

Last month Jay experimented to create a seedy loaf akin to rolls we’d eaten during our winter sojourn. After tweaking his recipe over a couple weeks, we were both satisfied that the results were close to the rolls, or at least to our memory of their appearance and taste. Doesn’t the loaf look good on that “Colors of Morocco” fused glass coupe plate? Warm from the oven with or without butter, it is scrumptious! The bread tasted good with hummus, alongside tomato or squash soup, and toasted and spread with jam. This bread is also nutritiously packed with whole grains and seeds.

Jay is back to the rhythm of baking almost every week. Although he sets a timer for each stage, he can’t hear it downstairs in the studio, but knows when to come up and check the dough. Jay makes two loaves that come out of the oven in time for us to cut into one for lunch. After a couple more studio hours and bread cooling, he bags the second loaf for the freezer. Having two or three loaves in the freezer gives us a choice: What will be good with today’s soup or sandwich?

If you enjoy the rhythms of mixing or kneading dough, try Jay’s recipe for yourself. Let us know how your loaves turn out, any adaptations you made in the recipe, and what you ate with your seeded bread. We’d love to hear from other bakers, so please come back and share a comment, below.

Dissolve yeast in warm water. Mix in flours, vital wheat gluten, oil, salt, and honey or sugar. Add seeds and cereal and work by machine or by hand until you can form a smooth dough ball. Oil the mixing bowl containing the dough; cover and let rise until dough has doubled in size. Punch down dough, remove from bowl, and shape into two loaves. Cover and let rise until doubled. Brush water on surface of loaves and press pepitas into the top. Bake about 30-35 minutes on a baking stone in preheated 350-degree oven.