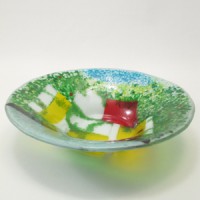 When on the first day of this new year I asked Jay to tell me his favorite project in 2016, he immediately said, “The twin mirrors.” That collaborative endeavor was a favorite of mine, too. A couple commissioned us to create a pair of mirrors to hang in a bedroom. The initial request was for one large mirror, but in conversations with the lady of the house, she and Jay decided upon a set of round mirrors. I worked with the client on glass selection to represent the lakeside setting, and Jay carried out fabrication of the mirrors. Afterward, I told the story of the entire process in a July blog post titled “Mirror, Mirror.”

Not only was the mirror project a favorite for both of us, but it drew us into one of the year’s memorable experiences. When we delivered the two mirrors to the customers’ home in northern New Jersey, we were less than two hours away from a fabulous sculpture park that was on our list of places to visit. It made perfect sense to spend the afternoon at Storm King, the subject of another blog post. Now we’ve been asked to give a photo talk about Storm King to an arts group.

My second question for Jay on New Year’s Day was to name his favorite fused glass project. Again, his answer was immediate and not surprising: the Yellow Casa bowl, which he created last spring.

After our January first-ever Caribbean cruise, we expressed in fused glass our impressions of the three ports we visited. In the beginning I made a list of some of the many good photos we had taken during days in port and noted their predominant colors. I envisioned non-representational, impressionistic renderings in glass. On opposite sides of the table in our fusing room, we each set up design trials in the form of four-inch coaster sets. The results acquired the titles of (clockwise from the top) Junkanoo, Road Town Harbor Blues, Midtown, Caribbean Wave, Parliament Pink, Charlotte Amalie Floral, and (center) Tortola Entries. Guess which four designs came from Jay and which three designs originated with me. answers at the end of this post*

We had fun playing with our Caribbean impressions for a month or so, and then Jay got a novel idea. He interpreted a traditional yellow house in Road Town, Tortola, BVI, in a way that I can only describe as a combination of Cubism and impressionism. The bowl emerged from the kiln after slumping just in time for him to sign it and enter it into the Pocono Mountain Arts Council‘s 2016 Member Show. There it won a ribbon in the glass category! The idea for my favorite fused glass creation of the year also originated in Road Town. I was fascinated by the blue hues of the Caribbean waters, how they meet the bluffs of the island, and the relationship of the water to the lush green hillsides. My interpretation became Road Town Harbor Blues, a design I executed in several functional pieces, the largest of which is an 11-inch diameter bowl. My pilot set of four coasters was purchased, at our very next exhibit, by a woman who asked me to create four more so she could have a set of eight.

It occurs to me now that our favorite projects last year all had some connection with locales along the water. What inspirations will come in 2017? Time, and perhaps some travel, will tell!