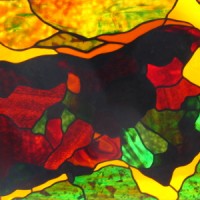 If you do not yet have a poem to pull out of your pocket on Thursday and share with other parents waiting at the bus stop, co-workers in the lunch room, fellow shoppers or store clerks, or a friend you see at the library, perhaps you will want to carry one of these.

She Walks in Beauty by George Gordon, Lord Byron

She walks in beauty, like the night
Of cloudless climes and starry skies,
And all that’s best of dark and bright
Meet in her aspect and her eyes;
Thus mellow’d to that tender light
Which heaven to gaudy day denies.

One shade the more, one ray the less,
Had half impair’d the nameless grace
Which waves in every raven tress
Or softly lightens o’er her face,
Where thought serenely sweet express
How pure, how dear their dwelling-place.

And on that cheek and o’er that brow
So soft, so calm, yet eloquent,
The smiles that win, the tints that glow
But tell of days in goodness spent,
A mind at peace with all below,
A heart whose love is innocent.

Afternoon on a Hill by Edna St Vincent Millay

I will be the gladdest thing
Under the sun!
I will touch a hundred flowers
And not pick one.

I will look at cliffs and clouds
With quiet eyes,
Watch the wind bow down the grass,
And the grass rise.

And when lights begin to show
Up from town,
I will mark which must be mine,
And then start down!

Fishing on the Susquehanna in July by Billy Collins

I have never been fishing on the Susquehanna
or on any river for that matter
to be perfectly honest.

Not in July or any month
have I had the pleasure–if it is a pleasure–
of fishing on the Susquehanna.

I am more likely to be found
in a quiet room like this one–
a painting of a woman on the wall,

a bowl of tangerines on the table–
trying to manufacture the sensation
of fishing on the Susquehanna.

There is little doubt
that others have been fishing
on the Susquehanna,

rowing upstream in a wooden boat,
sliding the oars under the water
then raising them to drip in the light.

under a blue cloud-ruffled sky,
dense trees along the banks,
and a fellow with a red bandanna

sitting in a small, green
flat-bottom boat
holding the thin whip of a pole.

That is something I am unlikely
ever to do, I remember
saying to myself and the person next to me.

Then I blinked and moved on
to other American scenes
of haystacks, water whitening over rocks,

even one of a brown hare
who seemed so wired with alertness
I imagined him springing right out of the frame.


None of these poems seem to jump into your pocket? See if you find one you like better at the National Poetry Month Poem In Your Pocket Day web page.