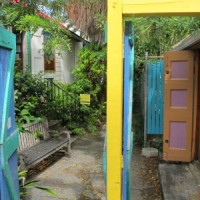 The year 2016 is off to a colorful start. During the first week, Jay and I took an Eastern Caribbean cruise. Our first cruise, on the Norwegian Spirit, proved to be very relaxing! Now that we’ve returned to snow country, we are still warmed by the memories, especially recalling the vibrant hues of our ports of call.

The Spirit’s first stop was at Nassau, the Bahamas. Awakening Sunday morning at dawn, I opened our cabin curtains to catch sight of small silver fish jumping out of the water and a bird (a shearwater?) skimming just above them seeking breakfast. Up on the promenade deck we watched the sun rise over Nassau’s harbor and soon after finishing our own breakfast we went ashore. At 8 a.m. the city was still sleepy as we began exploring by walking the streets.

Pink, the color of government buildings, is very prevalent in Nassau, but far from the only striking masonry color. Vibrant yellow and orange walls reflected the tropical sunshine. A green police station set off white uniformed police lined up for morning duty call. Fushia-colored bougainvillea and yellow elder (Alamanda), the Bahamian national flower, bloomed profusely. Ladies in bright dresses and matching hats climbed the steps of a blue Baptist church.

Bahamian people are as friendly as their climate is warm. Almost everyone we met on the street greeted us with a smile and friendly words. After climbing uphill to the Catholic Cathedral of Saint Francis Xavier, we sat down on a courtyard bench to sip water and watch parishioners in their Sunday best depart an earlier Mass. Immediately a smartly dressed woman sat down with us, asking where we’d come from and assuring us the congregation paid no attention to tourist togs. Inside we found an equally enthusiastic welcome, and welcome air conditioning. After a lively 90-minute liturgy, during which the organist seemed to pull out all the stops and the people sang lustily, we were shown to restrooms and given directions for restaurants.

After two more nights being rocked to sleep and a day and a half at sea, we sailed into the harbor of Charlotte Amalie, St Thomas, US Virgin Islands. Turquoise, sea blue, sapphire, azure, all those shades of blue describe the waters around St Thomas. On land, color galore and chickens everywhere, Danish street names and architectural flourishes. We climbed the 99 Steps, a staircase “street” built by the Danes in the 1700s, and other brick steps past residences and historic hotels. As we approached Blackbeard’s Castle, a US national historic landmark, a black cloud crossed the blue sky. Upon entering the historic landmark’s gates, a tropical storm unleashed torrents of rain and we ducked into the stone lookout tower built in 1698. When the tower became too damp, Jay and I and another tourist found seats in a side building until a staff person offered the three of us a ride back down the hill to town. Between showers we found the building where Camille Pissaro was born, at 14 Dronningens Gade. The impressionist’s childhood home now houses several shops and an art gallery that has some of his sketchbook pages. We slipped into the Cathedral of Saints Peter and Paul to view ceiling and walls filled with Biblical murals painted by two Belgian artist clerics in 1899. Before returning to the ship, we walked a second time through Emancipation Garden, observing Lignum Vitae and other tropical trees adorned with Christmas ornaments. The park has three bronze monuments: a bust of Denmark’s King Christian, a scale model of the U.S. Liberty Bell, and a bust of a freed slave blowing a conch. Since sheltering during downpours and jumping over deep puddles consumed more than a couple hours, I am surprised at how many photos we have of Charlotte Amalie street scenes.

Tortola, British Virgin Islands, was the Spirit’s final port of call. Our first “find” in Road Town, the capitol, was the Old Government House Museum, not an easy place to find since our guidebook gave no street address and the BVI map carelessly placed symbols. The gracious former official government residence is painted white but certainly has more color than its green shutters. Period furnishings, artifacts from royal visits, paintings, and a display of all the colorful BVI stamps provided only half our pleasure. We took the time to read a fascinating first-person account of the 1924 hurricane that brought down the original house around the author (the Commissioner’s wife) and her family. In the library I found a book of watercolor paintings and memories of 1960s Tortula by Jill Tattersall. In rattan chairs on the second-floor veranda, overlooking turquoise water, I immersed myself in the book for more than an hour while Jay simply rested. After some time we strolled through surrounding gardens that were lush with green palms and tropical flowers.

Walking back toward the center of town, we noticed buildings we had seen in paintings hanging in the Old Government House, casas with bright-colored walls and metal roofs, many with contrasting color shutters and decorative trim. In mid-afternoon we sheltered from the sun in the Mid Town Restaurant. It seemed to be the West Indies version of a diner or cafe, where locals ate large portions of seafood and other local favorites. From a chalk-on-blackboard menu, Jay was pleased to learn that Shepherd’s Pie was a local dish, and I ordered Sea Food Soup after verifying that was the large dish in front of another patron. The bowl arrived brimming with conch along with chunks of fish and root vegetables the server identified for me. Another hand-lettered sign listed “home made juices” and our choices of ginger beer and lemonade turned out to be deliciously refreshing. They were different in flavor than anything we’ve drunk out of a bottle or, in the case of the lemonade, made in our own home.

Looking at our photos makes me want to head down to the fusing studio, pull out jars of our brightest colored frit, and get to work making a bowl. Such work (and the kiln) will warm the rest of the winter.