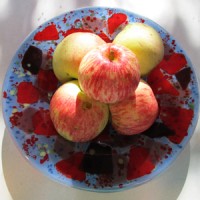 We live in an area with so many old apple trees that we think it must have been an orchard at one time. No apple trees are in our yard but a neighbor half a mile down the road lets us take all we want. Most years the fruit is gnarled and wormy but this is one of the good years. This afternoon Jay and I picked about 25 pounds of crisp apples from two different trees, one with speckled yellow fruit, the other just ripening to red.

In late August and in September during our Sunday walks we picked up apples from the ground: Whitney crabs, I think the small ones were, and large, soft, apples we can’t identify. We must have eaten a bushel of the big apples, enjoying them raw, sauteed as a supper side dish, cooked into chunky and pureed applesauce, and baked into desserts. 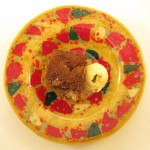 A raw apple coffeecake handed on by my mom or aunt from their neighbor, Jean Noonan, is sweet enough for dessert. Whenever I bake it I think of all three women, now deceased. I add twenty-five per cent more apples than the original recipe calls for and add nuts to the brown sugar and cinnamon topping. A couple weeks ago I used black walnuts, which made the cake extra delicious. 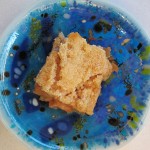 An easy way to use lots of apples is in apple crisp. Since I tend to bake desserts only on Saturday, I fill a 9″x13″ pan so it lasts well into the week. Our secret to keeping the topping crisp for several days is to only loosely cover the baking dish before refrigerating it.

Early one evening as the sun sank behind trees, it cast both light and shadows on a bowl of apples. The lowering sun reminds me that autumn’s first frost will soon end the growing season. Jay and I hope we get to pick some of the latest bearing apples before any hard frost so that we can savor autumn’s sweetness for another month or so.