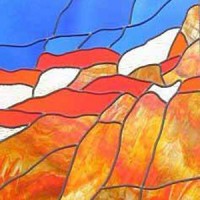 In October of 1998, my parents made what would be their last trip from Iowa to the east coast. They flew out and spent a few days with Mike and family in Massachusetts, then rented a car to drive to our home in eastern Pennsylvania. After a few days here Mom and Dad took me along on the drive south for visits with my brothers in Virginia and Georgia. In order to allay siblings’ anxiety about our parents’ welfare, I had invited myself along, despite being very busy with a full-time job, glass design commitments, and a significant volunteer position with a national organization. My mother’s increasing disabilities due to an Alzheimer’s type dementia were real but concerns about our 79-year-old father’s driving skills proved groundless.

Putting what I could on hold, I packed drawing supplies and left Jay with a promise to return with designs. Little did I know that the road trip with my parents would result in two autonomous panels with deep personal meaning.

Our first stop was my brother Ed’s place in Roanoke, Virginia. One day he and his wife took us to see land they owned in the Blue Ridge Mountains. We tramped around the property to explore an old cabin, find an abandoned still hidden by brush and trees, watch trout dart up a shallow creek, and sight a beaver hovel. The next evening our hosts prepared fresh-caught trout with almonds, cheese grits, and fried green tomatoes while I finished my first design. I scaled it to use most of a piece of Uroboros deep brown drapery glass that I’d measured before the trip. Uroboros’ original runs of glass produced “cow-tongue” sheets about 12″ x 18″. 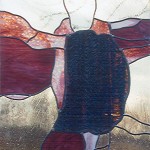 Bullseye and Wheatoncraft opals pick up purple and red tones in the Uroboros glass. More subtly those other glasses and surface striations in celery-colored Fischer mouth-blown glass echo the Uroboros textures. Lead lines play off the cow-tongue’s shape and interior color movement. This panel is richly mysterious. It embodies deep emotions, including delight and grief.

On the following day Dad, Mom, and I drove to Georgia. The Appalachians were aglow with red, orange, and yellow, fascinating my mother as if she were experiencing autumn for the first time. The flame-colored slopes were stunning against a deep blue sky. “Color, color, color,” remarked my father. “Slow drivers, slow drivers, slow drivers,” he added when we got stuck for miles behind a sluggish van on the Blue Ridge Parkway. My choice of routes was not appreciated as time began to outweigh scenery. It was after dinner and dark when we finally arrived at the home of my brother Paul’s family.

The trip was long in other ways, too. Mom was experiencing “sun-downer” syndrome after more than a week away from home. Her confusion about food and social conventions was increasingly apparent. This once-beautiful woman could no longer manage personal care on her own. Just as the three of us had traveled through flame-colored mountains, our family was traversing a rough territory set on fire by Mom’s debilitating disease. Some of that experience, both awesome and frightening, came out in a glass design on our last evening in Georgia.

The completed stained glass panel included an iridescent Australian fire opal, red semi-antique, and amber drapery glass, contrasting with cobalt mouth-blown glass. After months of reflection on what the design represented, I named the panel “Traversing the Firelands.” 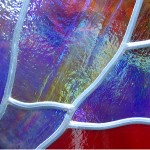 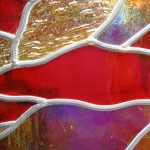 Both of my parents are now dead. Photos of the two glass panels still evoke memories of those October days and of the years that followed. The journey required courage, the mystery deepened. It’s a rich background for my Walk to End Alzheimer’s, advocacy for those who still traverse the firelands, and hope for an end to the disease before it affects the next generations.